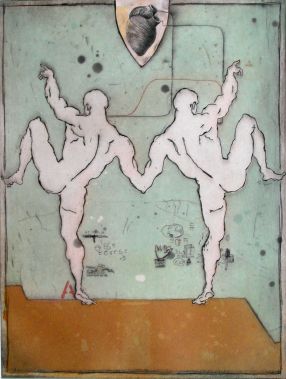 Deutsche Übersetzung folgt in Kürze Born in Toulouse (France) in 1964 Self-taught in art Cairo’s work draws its own universe, full of metaphors and crossed references. The origins of this colorful creation are multiple: history, business world, psychology, religion, spirituality, esoteric, comics, rock, family, advertising, … The story Cairo tells is not linear. It can […]

The story Cairo tells is not linear. It can be found in all his works.

His visual language is multifaceted: painting, drawing, and photo, art work with the general public, engraving and art performance.

The images that are used have often different meanings, several “levels of meaning”. There is really not a specific message. The work is suggestive. Universal symbols are found throughout.

When he works, Cairo tries to stay, as long as possible, in what he called the “transition stage”. It is the moment between the pure instinct of the creative strength (disorganized and impulsive) and the realization of a final product (ultimate step of the creative process).

In this stage of “transition”, where everything is possible and “in progress”, Cairo can increase his imagination by giving himself more freesdom and by taking more risks.

Book of paintings “unicity vs. uniformity”